Disturbing a sports fanatic while they’re watching a game isn’t normally a good idea. That’s because sports fans are connected and passionate when they’re engaged. In fact, 41 percent of all TV-related Tweets are about sports programming—even though sports account for only 1.3 percent of all TV programming*. A major consumer electronics manufacturer, however, found that disruptive advertising was the perfect way to increase purchase intent among avid football fans.

In fall 2012, this consumer electronics manufacturer was releasing its 4K resolution television, which boasts ultra HD capabilities four times the resolution of standard TVs. Prior research had proven that the NFL season, coinciding with the holidays, is when most TVs fly off the shelves. This combination provided this manufacturer with the ideal environment to team up with GumGum, an in-image advertising platform, to promote its TV to avid pigskin fans—males 18-49 who watch football—who had researched TVs online in the past six months.

For its part, GumGum assembled an in-image campaign to reach the key audience with animated and static ads overlaid with football images across its platform. To measure the campaign’s effectiveness, real-time brand lift metrics were needed to prove that the disruptive approach was a winner and increased purchase intent among the key audience while the holiday season was in full force. 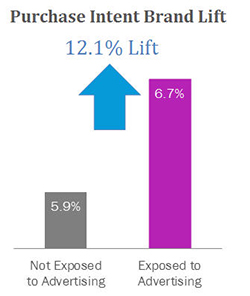 With the help of Nielsen Online Brand Effect, both sides were able to review the in-image campaign’s performance in real time. Nielsen Online Brand Effect identified the most effective ad exposure frequency in real time. Through this information, the pair discovered that exposing consumers to an ad on three occasions drove five times the campaign average lift—resulting in an overall 12.1 percent brand lift in purchase intent among the fans who were exposed to the campaign.

With real-time metrics they could use to measure advertising performance, GumGum and the manufacturer learned that connecting a brand with a passionate and engaged audience—while they were actively consuming content—provided game winning results.

Nielsen Online Brand Effect provides the first real-time, enterprise technology platform that allows digital advertisers and their partners—publishers, ad networks, exchanges and demand side platforms—to collaborate directly around measuring and optimizing brand lift metrics. Once a campaign is in market, consumer sentiment is captured through a survey that asks each consumer sampled a question to measure how the campaign performed against its primary objective. Nielsen Online Brand Effect is the only internet advertising effectiveness solution to provide a simple, intuitive interface for managing all aspects of your brand campaign measurement and optimization initiatives in real-time.