Viewability + Resonance = Success: The Real Deal about the Viewability Buzz

Only about 50 percent of all online ads are considered “viewable.” That means about half of ads are never viewed*. And associated spend on those ad spots could have been wasted. Understanding an ad’s viewability is an important part of creating effective advertising.

But as a standalone measurement, viewability is only a small part of the larger picture of advertising success. At the end of the day, a brand advertising campaign’s primary goal is not viewability, it’s brand lift, or the percentage increase in the primary marketing objective of a brand advertising campaign (e.g. awareness, favorability, purchase intent). This is why it’s critical to look at both with an integrated approach, not in siloes, to understand how viewability affects a marketer’s primary goal of brand lift.

In a recent study of 30 separate Nielsen Online Brand Effect display campaigns, brand lift improved by an average of 31 percent when responses generated from non-viewable ads were filtered out. This new ability to measure viewable brand lift as a real-time success metric provides marketers with the ability to identify not just which ads were viewable, but which viewable ads positively resonated with their audience, where to run them to maximize viewability and impact, and how often to run them. 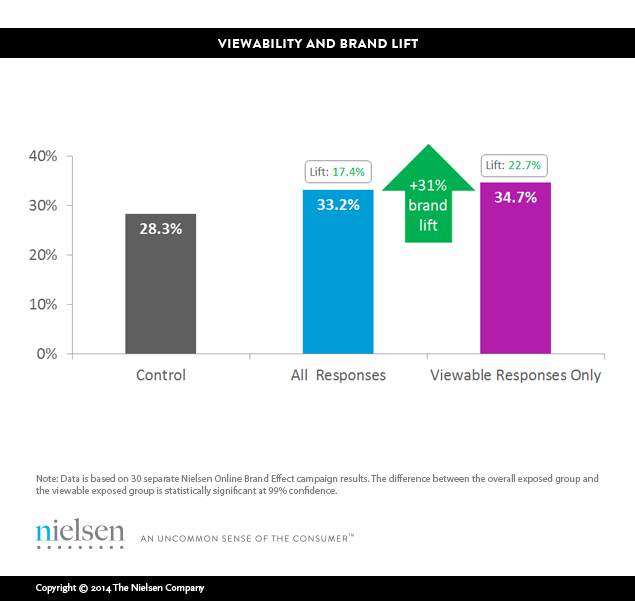 “It’s easy to jump to the conclusion that viewability equates to success. But a viewed ad does not guarantee brand lift,” said Dan Beltramo, EVP, Product Leadership, Marketing Effectiveness at Nielsen. “Ensuring viewability is only the first step of an advertising effectiveness process that yields and maximizes return on investment. The goal of brand advertising is to positively influence brand opinions, generate brand lift, and ultimately impact sales. Simply being viewed proves only that someone saw it, not that they connected with it.”

Using real-time viewable brand lift metrics to maximize return on investment (ROI), advertisers can quickly identify the campaign elements that will drive both viewability and impact now while the campaign is still running, not later when the campaign’s concluded and those dollars have been spent. Advertisers can then take these learnings and apply them to the next campaign, and the next, over time, building best practices for maximizing viewable brand lift that are custom to that particular brand. If knowing is half the battle, reliable measurement is definitely the other half.

*Based on a recent study from Integral Ad Science, 49 percent of ads served on ad exchanges are never viewed. According to the Interactive Advertising Bureau (IAB) and the Media Rating Council (MRC) industry guidelines, a viewable impression is defined as a served impression in which a minimum of 50 percent of pixels are in view on a user’s screen for a minimum of one consecutive second.